Have you ever driven down a highway in a hurry to get to a meeting, see a person in need on the side of the road, and think, “someone else will be able to help”? Or how do you respond when you hear two people swearing or shouting at each other? I know I sometimes turn away or ignore it. A part of me whispers, “I don’t want to get involved.”

Then I remember the New York times story of Kitty Genovese who was stabbed over a half-hour period near an apartment where many of the people who heard the screams didn’t call the police simply because they didn’t want to get involved. 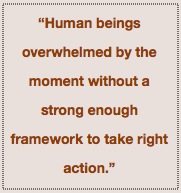 Were they / we apathetic, cruel, evil people? Probably not any more so than others. More likely they / we were human beings overwhelmed by the moment without a strong enough framework to take the right action. We were frozen unable to move like in a bad dream.

What does it take to respond appropriately in the moment in these highly charged situations? It takes much more than just being in the moment. It also requires understanding that moment and being prepared for it. Here is a small scenario to illustrate the factors involved.

Imagine having just driven hours with friends to go on a summer hike you had been planning for weeks. Yesterday’s weather report forecasted sunny and clear. You arrive at the trailhead and indeed it is sunny. But just as you are about to start, you notice a posted weather notice indicating a 30% chance of snow. You were prepared for cold weather but not snow; in fact nobody in your group has hiked in snow. Would you be the one to bring this up with your excited friends? Would you have the nerve to postpone or worse cancel? Or would it be easy to rationalize… “it probably won’t snow and besides snow is not so different from what I’ve experienced.” 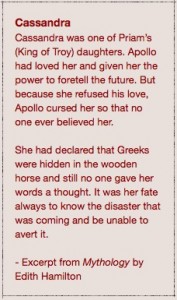 A curious thing happens at that moment of decision. With hopes and social pressures high, you may start to “bend the map” (see Deep Survival), a process by which you try to alter reality to match your expectations. You begin to overestimate your skills and that of your peers. You judge the weather to indicate great weather. You fail to even entertain the idea of reassessing your capabilities and equipment. It just “feels” right… so you roll the cosmic dice with your life.

What happened? The social pressures, the heightened emotions got in the way of measured thought. Furthermore, the voice of the moment always seems more urgent and important than the faint voice of the future which may or may not come to pass. It’s your own personal Cassandra, that Greek mythological figure who predicted the future but was believed by no one.

While nothing may have happened for that trip, sometimes events conspire to create the disasters or accidents that could have been prevented.

On January 28, 1986 at 11:38 am the Challenger lifted off while broadcast on three major TV networks. Seventy-three seconds later to the horror of those watching, the external fuel tanks ruptured and killed the crew of seven.

Later investigations revealed that the O ring which normally sealed the joints between sections on the booster rocket failed under the cold launch conditions. With the hundreds of thousands of people involved and multiple complex systems working together, one might expect that a problem or two may slip through.

However, what NASA failed to understand was not so much the technical behaviour of the O ring as it was the human behaviour of the system. Concerns about the O ring had been raised. One contractor went as far as to strongly advise that it was unsafe to fly. These concerns were ignored for the same reasons you might ignore the posted weather report. Eleventh-hour decisions, crisis mode thinking, social pressures, uncertainty of data all prevented warning signs from being acted upon. With the “world watching” on the networks and pressure from the Reagan administration to launch, NASA’s culture inadvertently shifted from “prove to me it is safe to fly” to “prove to me it is unsafe to fly” (see Flirting with Disaster).

All this is to say that if the consequences are high, the system complex, and the understanding uncertain, your first gut instinct response is not likely to be a good one.

How can you avoid getting caught up in the moment like NASA employees or the New York apartment dwellers?

One helpful strategy is to understand the sources of critical problems, determine the warning cues that hint at the problems, and develop action plans for the cues. For example, an important lesson in self-defense is awareness of surroundings and the ability recognize threat cues. Threat cues are warning signals that potentially hint at actual threats. Perhaps a person walks towards you in a certain way, or a person watches you for longer than normal. Taken together with other environmental cues (time of day, location), you may be able to recognize a threat and act on it (crossing the road, going back the way you came) before it becomes life-threatening. 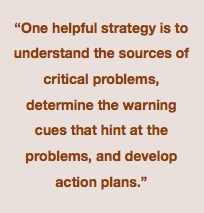 For me, I have taken to the habit of turning towards any shouting or swearing to scan the situation. Should I call 911? Should I intervene? Or do I just need to continue watching? In the hiking situation, having an exit plan in advance for unforeseen circumstances would help while NASA would have done well to build in protection against last-minute decisions.

Knowing what cues to look for, however, requires a deep understanding of the systems in operation. Serious hiking requires an understanding of survival situations. A space shuttle launch requires generations of people experimenting, building, learning. It is no minor task!

While we need to build our ability to recognize warning cues and act on them, organizations must also build in systems to enable dissenting action. Social norms and culture are after all more influential than individuals. Thoughtful companies have provided third-party phone lines for employees to report ethical breaches recognizing that “ratting out” your peers is often considered a worse crime than reporting the truth.

Nevertheless, it is your responsibility to take action when needed. While we may never have to watch others die like Kitty Genovese, we are all engaged with high pressure situations that test our character. So take the time to understand the system, recognize the warning signs, and act on them despite what others may say or think.

One Reply to “Deadly Daydreams”