As I was brushing my teeth, I noticed the dizzying array of products lining the bathtub. I wondered, what more does one need than a bar of soap and shampoo? And theoretically you only need the shampoo since it acts as a reasonably effective body wash. Nevertheless, I am told that there can never be enough shelf space around the shower.

Trust me, I am going somewhere with this.

To begin with, there is little doubt that cleanliness has long been a part of human history (Cleanliness is godliness after all). Instinctively, we writhe our noses at the stench of rotting fish or corpses of any sort, and even the ancient Greek goddesses took baths although woe to anyone who spies them doing so (see the story of Actaeon). 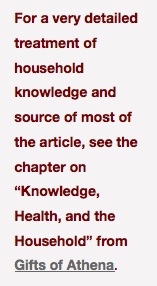 But the idea that cleaning and keeping clean prevents disease is a very recent concept. Hygiene and sanitation only started becoming widespread after 1815. During this time, statistics and data analysis became more and more persuasive at showing the effectiveness of a variety of medical procedures such as smallpox inoculation. Eventually, this led to the Victorians’ obsession with cleanliness and other forms of proper etiquette.

What is the significance of this? This shows that keeping households clean is a learned behaviour passed down through generations of instincts, traditions, and what society has learned up to that point. In fact, many of the routine tasks we take for granted have a history that is rich in story should we take the time to look at it.

However, what is routine is not necessarily helpful because what society has learned may be off the mark. The Victorians’ “war against dirt” was based on the misguided belief that disease spores travelled through odours and came from filth. While the application of this theory worked reasonably well to prevent certain diseases, it failed to handle diseases like typhoid or cholera.

It wasn’t until the discovery of the germ that hygiene took an unprecedented turn for the betterment of society (but also to the detriment of those doing household chores… yes, yes, the massive decline in infectious diseases in the industrialized world after 1870 saved millions of lives… but consider my bathtub!).

What is interesting is that science by itself was not (and is still not) capable of convincing the masses by itself. Imagine trying to convince a group of people who had never heard about germs that invisible unimaginably tiny organisms were the source of their illness. What it took to disseminate this discovery to the average person was a combination of fear, guilt, and education mixed in with a bit of science… marketing tactics familiar to us even today.

Microbes were promoted as an “invisible, omnipresent evil agent, a live monster threatening with infinite malice to attack the most vulnerable.” Home economics textbooks aimed at women warned that “a dirty house is full of poison germs… imbue your children with a horror of dirt in any shape or form.” Because infants were susceptible to disease, physicians and nurses became an authority figure that dispensed advice for mothers. Add to this the relentless barrage of advertising and social pressure to purchase more cleaning products, it’s not surprising that women everywhere in the Western world started to believe that they alone were responsible for the survival of their household. It took a whole range of influences and several generations to embed an idea like hygiene into a society.

If we stop here and think about the challenges we face in the modern world, what would it take to embed something like healthy environmental practices or compassionate behaviour? What kinds of education, books, stories, examples would be needed? The answer is a lot and a wide range of it.

The risk is that often the original message is distorted by the time it reaches the average household and when it becomes embedded it also becomes hard to change.

For example, if the advertisers had it their way, then there are deadly germs everywhere that must be rooted out and destroyed wherever they appear. The truth is of course far more nuanced. First, the majority of germs are harmless and are often beneficial in keeping other more dangerous germs from multiplying. Second, our immune system needs to be exposed to germs in order to become stronger. Children growing up in sterilized environments will have immune systems that are less able to deal with dangerous germs. As a result, while personal hygiene has enabled us to survive, taken to an extreme it may eventually make us more vulnerable to future epidemics. This is the tricky game of life that we play as a society!

So the next time you microwave your dish sponge or use hand sanitizer, stop and think about why you do what you do and how you came to know what you know. By no means do I imply that we should reject anti-bacterial soap or throw out age old folk recipes. I only suggest that we constantly attempt to evolve our understanding of the theory behind what we do because it is theory which tells us whether a cleaning technique is effective or obsessive. And we must be prepared to adopt new approaches to seemingly old problems.

In any case, there are just too many chores at stake to trust to advertisers or unquestioned traditions. Still… it is hard to shake the fear and guilt. Maybe it’s time I clean my bathtub.

2 Replies to “How my bathroom products came to be…”