I am officially a new soccer referee.

Ahead of me is a life of attempting to make sound judgments while enduring angry players, opinionated spectators and stressed out coaches. To you it may sound like a depressing way to spend my time. To me I think, what better way to combine my favourite sport with a character-building experience? 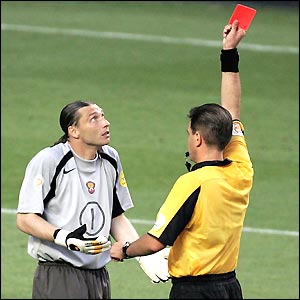 As I stumble my way through missed calls, improperly awarded penalty shots and carding players that bug me, I am discovering the intricate and rich relationship between the spirit of the game and the referee. The role of the referee appears simple: apply the laws of the game. However, apply the rules too strictly and the game gets bogged down. Fail to apply the rules and the game descends into a chaotic mess. This dynamic balancing act is captured by the mysterious and unwritten rule called Law 18. Law 18 states that the referee must prioritize the spirit of the game above the other seventeen laws.

To begin with, kids who play with other kids quickly understand three basic tenets. First, a game without rules is not a game. Second there is no game if there are no players. And third, a game is not fun if people don’t follow the spirit of the rules. These fundamentals can help us understand something about the adult games that we play.

No Rules No Game

As the US and Canada post record job losses in November, more and more people are asking questions about the financial game we take for granted.

That we have moved from trading crops to trading minerals or paper to trading electronic bits and bytes is a testament to the complex system we have learned to play. But sometimes we forget the basics. Sub-prime mortgages given to unqualified buyers is one of the obvious ways in which we rigged the game to fail. The underlying issues, on the other hand, are more numerous and complex than I can likely explain in my lifetime (consider asking George Soros instead).

Nevertheless, at least one part of the crisis story is the trend over the last few decades towards killing the referee. Governments call it deregulation. In the US and to some extent in Canada there has been an almost fanatical belief that free-markets can solve anything and everything and therefore must be unshackled from government rules and regulations.

Consequently, restrictions and requirements for mortgages, auto loans, credit cards were significantly relaxed starting in the Reagan years. New financial instruments allowed banks to sell off bad loans around the world to hide their value. Rating agencies, unable to determine risk, relied on the issuers to figure out risk. Imagine the referee asking the offending player what the rules of the game are!

The idea of being “unshackled” from the rules may appeal to our deep adolescent desires of raging against the machine. Yet if one were to stop and consider even momentarily the consequences of a game played without rules, it’s not hard to imagine the kind of game that would be played. Cheating, aggression, violence, spectator fights… and I’m only thinking about soccer.

Players will agree that there are good refs and there are bad refs, but no serious player would claim that having no refs is good for the game. Likewise, there are likely good and bad regulations or regulators, but this is not an argument for removing them.

Unfortunately, it is easy during the game to think that it’s all about scoring the highest number of points or making the most profit, and forget that a referee is what keeps the game playable. Corporate executives will, like players, push the limits of the rules, but the whistle must still be blown and blown with confidence.

No Players, No Game

In the end, the “free” market is one among many kinds of games that are played in life. The market can solve a limited range of human challenges, but with its short-term memory and transactional mindset, the market is hardly capable of solving all problems.

Markets rarely explore the frontiers of our understanding (too impractical) or invest in long-term projects with high social benefits (not enough return on investment). Furthermore the market also cannot tell us who we are as much as advertisements might claim otherwise.

Ultimately we must remember that the game is created to serve society and not the other way around.

So why do we play games? Why do we have our kids play soccer for that matter? Some hopeful parents might intend for their kids to become rich and famous. Wiser parents know that the game is meant to develop their kid’s discipline, teamwork, and resiliency among many other character traits.

Likewise, adults may think they play the market and financial game to make a profit. While it’s true no one likes to lose at the game, would you play a game where people cheated all the time, injuries were faked, and the opposing team was so impoverished they hardly constituted the title of “opponent”?

The true benefit of markets is that they enable innovation precisely because they allow the players to compete, fail, and try again. But they need players. A society that gives all the advantages to the wealthiest and fails to support the social programs that enable everyone else will collectively have less ability to face global challenges. (See Mokr’s Gifts of Athena for more on the connection between innovation and social structure).

So you see, the best kind of games are ones that have a lot of replay value. We play games so that we can play again. Playing games that kill off other players defeats the purpose.

No Limits No Freedom

What does all this mean to us practically speaking?

It means that before we rail against the seeming injustice of taxes and regulations and limits, we should stop and think more broadly about what it is buying us. For example, if the speed limit were lowered, we might feel that our freedom is being limited, but what if it also “frees” us from the risk of a pointless death? Or from the financial, emotional, spiritual toll of accidents? Likewise, each time we remove a regulation to increase our return on investment or reduce our taxes, what is the cost to our collective ability to play the game?

Perhaps having limits and rules is what makes us more free. Perhaps the challenges facing our globe require us to involve as many players as possible.

Life evolves quickly though and we must be ready to adapt the structure of the game. We must be ready to cultivate our own Law 18, a law that is unwritten precisely because it relies on our judgment and sense of fairness to figure out how the game should be played.