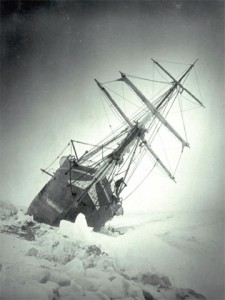 The Antarctic explorer Ernest Shackleton set sail on the Endurance with twenty-seven men to cross the uncharted continent. But a day before he could set foot on solid ice, the Endurance was locked and eventually crushed by the ice floes. It took months of waiting in one of the harshest places on the planet, making a harrowing journey over 850 miles of the most dangerous seas, sending a skeleton crew to reach a tiny whaling outpost, and returning to rescue the remaining crew. All 28 survived to tell the story and it is told beautifully in Alfred Lansing’s ENDURANCE: Shackleton’s Incredible Voyage.

Much is made about Shackleton’s leadership in keeping the crew together and focused on what was important. And there is no doubting that he played a significant role in the crew’s survival. Shackleton chose people of hardy character appropriate for the journey. He navigated the social dynamics between the men to keep stress down. He also maintained confidence and reason in the face of duress.

However, this story also illustrates that leadership is not a one-person show. There must be an ecology of leaders that provide the needed capabilities. Here is a list of other roles that were crucial to the crew’s survival:

There was a cook, a musician… and many more roles that the community of crewman needed to survive.

So often our idea of leadership is of the one person in authority. As a result, we focus all of our attention on that one person’s behaviours and actions.

The Point: If you want to assess the leadership of a team, then look at all the formal and informal leadership roles in the community.