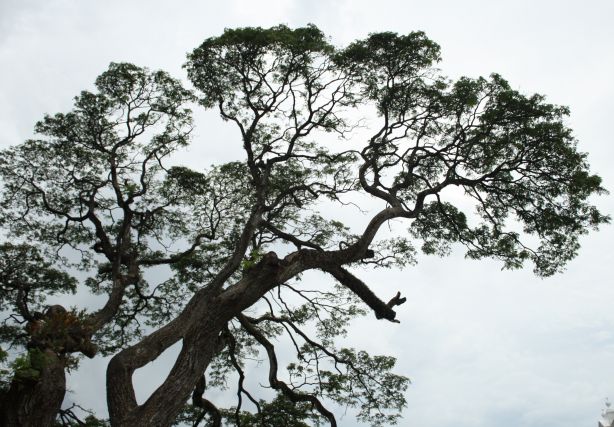 We barrel down the road in Sri Lanka and swerve to avoid a three-wheeler but also the man walking his heifer down the road. A couple teenagers ride precariously beside us on a bicycle. A family of monkeys scurry across the road as our driver honks the horn. It’s slow going crossing the island where a seven-hour drive is considered a short day trip. 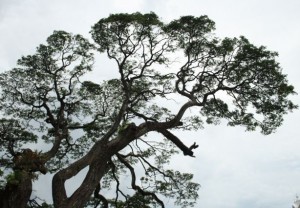 I spend a lot of time behind the window in the passenger seat enviously watching the rich mismash of life I cannot access. Sinhalese signs flood the towns advertising their function. People perform rituals at temples dressed in white. Street vendors sell local delectables that my stomach eyes suspiciously. I proceed too cautiously not wanting to be exploited or bed-ridden.

It takes a a local to let us in the cultural door. My father-in-law rolls down the window and negotiates some fried shrimp for us to eat on the way and then runs down to the stand to buy a Coke. Brands do matter when everything else is unfamiliar.

With his guidance, we learn why the buses are driven by mad chariot racers; they are paid by commission. We find out our rough looking safari tour guide doesn’t get lunch, so we offer him ours. On the road, we get a botanical lesson on king coconuts, tea bushes, and cassavas.

What is amazing here is the bazaar of productive activity that takes place on a single block from fine rest houses to little shacks selling plantains and SD cards for digital cameras. Unlike the shopping malls from back home where we see only the clean, artificial facade, I get a sense that owners here make their own products in the backroom (or repurpose them from American factories). With half the population in farming, it’s clear to me that although they are cash poor, they are more resourceful and resilient than Canadians.

The pace of development is stunning. Everywhere you see construction. Word is that the government will be rapidly developing Jaffna, a harbour city previously controlled by the rebel group LTTE. The newspaper proclaims that Sri Lanka is open for tourists. And I don’t doubt it. Hotels are being built. Roads built out to remote beaches. Restaurants are figuring out what tourists want. With the civil war ended brutally by the government, many Sinhalese families have returned. Visitors from Europe also inject much needed cash into the economy. In a few more years I’m sure I won’t recognize the country.

Who will really benefit from this boon? It’s no secret that the government is pocketing a little extra (or a lot depending on who you talk to). President Rajapaksa appoints his family to run the government even as he positions his son for political office. He is a war president that has the political capital to spend. Yet one can’t help but smile ruefully at the portraits of him everywhere and his imprisonment of the war general who dared to oppose him in the election.

This is a country that still loves their kings I think. Without journalists being allowed much visibility into the country it is hard to confirm or deny the activities of the government.

Although large economic and political forces are positioning themselves over Sri Lanka, on the ground this is a culture that is still heavily guided by social networks (the older, non-tech kind) and religious customs. Large extended families live together and collaborate in daily activities, in business and in life vastly different from the segregated sub-urban families in Canada.

Buddhism is the most prevalent religion although you will also see hindu temples, mosques, and churches. I am often asked what religion I follow and after a few stumbling attempts I decide that I am mostly Confucian. They nod not entirely understanding but comforted by a professed religion.

It’s not that Canadians don’t have these kind of social relationships. It’s that we depend more on our institutions than each other. In Sri Lanka, there is no food bank. People offer beggars whatever change is in their pockets or fruit grown on their tree. The blind and the catatonic aren’t housed in old folks homes. They live with the families. The temple is the closest thing to an agency. They not only provide spiritual guidance, but also hand out school supplies to needy kids and scholarships to promising students.

Well, my month of traveling in Sri Lanka comes to an end. I’ve sampled the culture as best as I could. I’ve tasted the food, lived with a family, partook in religious traditions, had conversations. I have video snippets and gaps in the storyline. I have pictures and my memories. It’s just a sampling but enough of one that has me thirsting for more.

But perhaps your curiosity can help me make more of my memories. What details are you interested in? About Sri Lanka or my experiences in it?

Look forward to hearing your thoughts.