There comes a time in every young man’s life when he must learn how to light a blow torch, to run stone through a wet saw, and mix cement with water. Or so I tell myself as I stumble my way through learning how to redo a part of my bathroom.

Let’s face it. I grew up with a computerized, virtual view of the world. The merest stroke of a key and all can be altered in the digital world with little consequence to the real world except perhaps a numbered software error. But renovating the bathtub faucet and tub surround requires a crowbar and the possibility of wrecking or blowing up your home.

For those that grew up on a farm, you can stop laughing now. And just for the record, I had an experienced farm hand with an eye for design help me with this project.

For others less inclined to take apart stuff, I’d say try it! If possible and if in the right state of mind, try to (as I tell myself) relish the frustrations of discovering your own ignorance, but also know that you can figure it out.

For instance, we initially took apart the walls and waited for the plumber. Then a stroke of good fortune: the plumber did not show up. Which left us to decide whether we could do it ourselves. And you know what, when we looked at the cuts and crimps and solders needed, we got the plumbing job done with only one too many trips to the Home Depot. 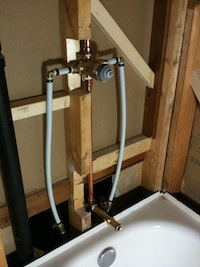 Nevertheless, turning on the water and finding no leaks was sweet victory. What made it truly sweet though was understanding how the flux works and where to apply the heat and knowing how you’d fix it if something goes wrong. It’s knowing that it wasn’t a fluke. At this point, I have to thank my many supporters: Brian, YouTube, Google, and three different opinions from Home Depot.

It’s too bad Do-It-Yourself isn’t encouraged more. In my parent’s day, DIY used to mean frugality and self-reliance particularly during the big recessions. My dad, during one particularly bad year in the 80’s learned to build the garage, renovate the basement, and make furniture. Nothing unusual.

These days, DIY has become fodder for reality TV shows. Why do it yourself when you can hire someone to do it all better? Why take the risk? Isn’t it a waste of time?

Which is unfortunate, because DIY is not about efficiency. It’s about learning how to figure things out and developing a sense of power over the world around us. It’s also my way of battling against the age of over-specialization. In a world, where we have delegated our powers to grow food, make things, and fix things to other people, what skills are we left with?

Once we got the rough-in valve installed, it was time to take off the tub surround. We expected the worse… black mold, rotten beams, a dead rat maybe. Instead we discovered old, but dry boards. No problems. Up goes the new water resistant boards and a special pink membrane to block moisture. Measure twice, cut once… unless of course you use the exact same erroneous process both times you measured.

Peer learning was what rescued me from certain disaster. My partner / mentor and I constantly bounced our understanding of the situation off each other. With his experience and my naivete, we were miraculously able to correct each other’s assumptions. I get now why the trades have an apprenticeship / journeyman system. It’s the best way to learn.

So when it came to planning the tile setting, I jumped into action with my computer skills and created for us a model.

Overkill? Well, you must understand that our hubris from our plumbing success led us to set our sights higher. We wanted to install stone tiles in a diagonal pattern. Two choices that made this job three or four times harder than installing waterproof porcelain in a standard grid pattern.

But when I saw the natural stone, I was mesmerized by the unique organic patterns in each tile. I felt as if each stone had a story. For a moment, I rediscovered my childhood inclination to pickup colourful stones from the alleyway.

As it turns out, the computer model made it very easy to choose the right sized tiles. We could move tiles around, decide on grout width, number of cuts and tiles needed, and even plan our approach to allow for variation in reality. That is afterall what a good model helps one to do. The resulting layout, however, has to be checked against the actual wall which is neither flat nor square. Nowhere is the refrain “the model is not reality” more apparent.

The anticipation of seeing whether one’s best laid plans were accurate is thrilling. Perhaps it’s the strumming of that thin, invisible link between one’s thought and one’s actions. To know that you can work through a two-week process of planning and learning and doing makes you think that you could do the same over a lifetime.

And the result? Well, so far it looks great in the photo. But it belies the little frustrations of imperfections inherent in the stone, the wall, the cut, the human hand multiplied by a need for perfection. My role was modest in this part. Mostly I was the apprentice that cleaned tools, ran errands, and more importantly observed closely. On occasion I got to make cuts and lay tiles that weren’t critical to the overral pattern.

The renovation continues, yet I already feel a sense of pride. As Ken Low would say, achievement is success hard earned.

One Reply to “Adaptive do-It-yourself? Or next ‘Canada’s Worst Handyman’?”