Creative problem solving is finding those bits of the universe that want the same thing as you do. – Ken Low

Searching for a solution is like finding a way to unlock a door. If the lock is well-understood, then you simply need to find the key or someone who knows how to unlock the door.

However, the more important problems are the ones where you don’t know where the door is and the lock is unlike anything you or anyone else has ever seen.

Opening these kinds of doors requires a willingness to find the door and explore its nature. It requires an understanding of what pieces the solution will require… perhaps a sense of the materials needed, the tools that must be created, or the physics or chemistry involved.

Here was a question posted on the Harvard Business Blog:

“I have never thought of myself as innovative. I figure the folks in marketing and R&D can take care of our innovation needs while I spend my work life just doing my job. But recently I read that we all have the capacity to be innovative, even conservative people like me. Should I focus on being an innovator?”

Being an innovator, in my opinion, does not have much to do with personality. Csikszentmihalyi, who studied creativity in a variety of people, found that you can be a happy extrovert like Raphael or a conservative introvert like Michelangelo. Or on the business side, one might think of Toyota who, according to Jeffrey Liker (The Toyota Way), is a very conservative company that makes decisions slowly, but implements quickly.

The key is more in the discipline of innovation or creativity. Although it is hard to create something new, the skills required to do so are discoverable!

Unfortunately, learning how to engage with non-routine challenges is not taught in schools or universities. More often people have had sought those kinds of projects in extracurricular activities that lie beyond the conventional curriculum.

What this means however is that exposing ourselves to a greater breadth and depth of ideas can only benefit our creativity. The emphasis is on breadth and depth. Kids for example easily exercise the power of association calling a pony a tiny horse or a lobster a big bug, but this does not lead to true creative power because it is not wedded with a depth of understanding.

Thus in your workplace, how much diversity or collision of ideas are encouraged? Are there people from a variety of backgrounds and disciplines? And in your personal life, have you engaged with a variety of disciplines? How have you tried to integrate it all together?

So if you want to create a greater pool of creativity in your mind, then learn a second language, read up on subjects unrelated to anything you know, and force yourself as kids do to make sense of the disconnected parts of the world.

Strange that creativity has become a novelty as if being able to decorate a room or to dress unconventionally is all there is to being “creative”. Don’t get me wrong. I greatly appreciate someone who can allow my eyes to feast on a beautiful visual experience.

But let’s open up the word creativity. Creativity, in my opinion, is the ability to design an original product, to develop art, to grow a life, to bring into being an experience, to generate a solution. Creativity is in essence about our ability to make something happen.

To create then is one of the most fulfilling capacities we can exercise.

So get ready to open up to your creative spirit as I explore what stops it, what enables it, and how you can strengthen it. 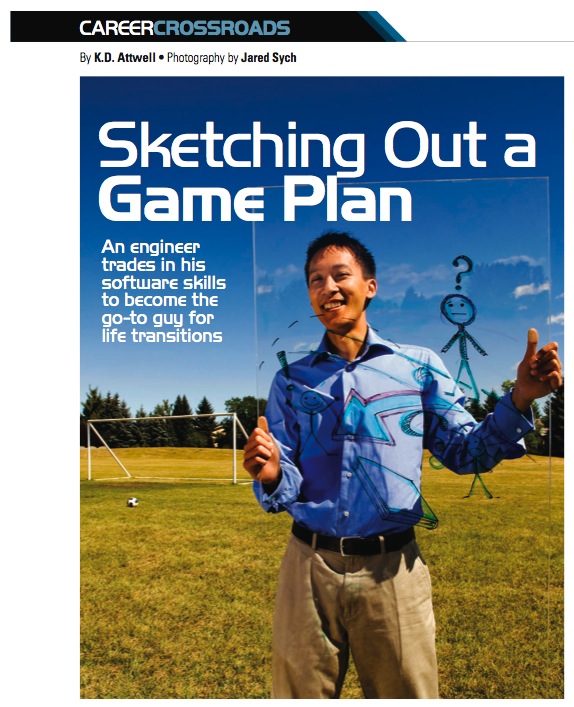 Chris Hsiung’s occupation seemed the perfect fit. A software engineer for eight years at Nortel Networks Corp., he had grown up glued to the keyboard. But he also had a calling, seeded in past days as a junior high peer tutor: Hsiung wanted to guide people. He founded U Venture in 2007 and now offers strategy on everything from career transitions to exploring your hidden creative side. But to go from coding to coaching, he needed a little guidance of his own.

For Hsiung, 32, it started in Paris. Embedded in France by Nortel for a year-long stint, he was shocked when he returned to Cowtown in 2002. “Culturally, we’re very different,” he says of the European approach to business. He recalls being denied entry to the Paris office one weekend by security because working overtime was not permitted without the vice-president’s approval, something that would assuredly never happen in Calgary.

Hsiung sought reconnection with Calgary’s community, turning to the Leadership Calgary course with Volunteer Calgary. He liked its “lifelong learning” focus – it fit with his knack for teaching people, a talent he had used while implementing software training programs at Nortel.

However, Hsiung soon realized he wanted a lifestyle change, as well. After attending a lecture by Canadian Lieutenant-General Roméo Dallaire in 2004, he was flooded with an array of mixed emotions. He began to think about his role in the world and the difference that he could make. “He was talking about child soldiers. It had a strong emotional impact on me,” Hsiung recalls of the lecture.

He injected this newfound altruism into his life. Jumping onboard with the Learning Village, an after-school activities program, he started looking for courses in volunteer soccer training, but came across a life-coaching course instead. “It was serendipitous,” he says. “There were no soccer-coaching courses available.” He signed up thinking it might provide a few new skills. Instead, he got hooked.

While pursuing his Co-Active Coaching certification at the University of Calgary, Hsiung hired a life coach of his own to help him with his quest for self-reinvention. He was taken aback when his coach suggested he change employment gears. “He said, ‘It seems like you want to go off on your own,’ and I said, ‘No, no, no.’?” Then, waking up one morning, he had an epiphany. He realized that lifelong learning was his passion – and that coaching others was the platform he needed to pursue it. 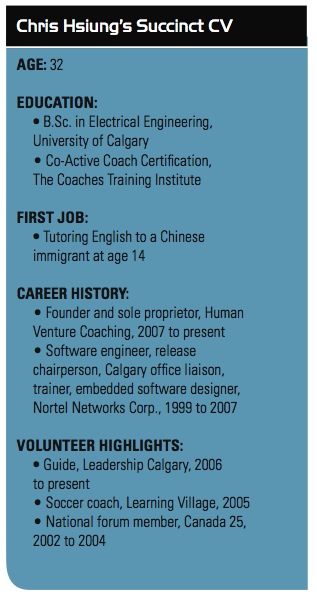 But Hsiung still had to face his biggest barrier in making a career change – letting go of societal expectations. He worried about disappointing his parents, who had supported his engineering career and didn’t consider jobs other than the standard doctor, lawyer or engineer to be viable occupations. “You always get these signals of what success is,” he says.

Other fears existed, too. Hsiung had to deal with taking a pay cut. “Usually, when you start a business, you’re in the hole,” he says. He reworked his finances so he wouldn’t “burn through them” right away, took on roommates for extra income, and dipped into his savings to start Human Ventures in 2007.

Almost two years later, he is often called upon to coach people through similar life transitions, but doesn’t recommend making any drastic life changes such as the ones he went through. Instead, he suggests people change their lives through small increments.

“I remember coaching one person who had a passion for mountain bikes on the weekends. She loved sharing that with other people. It struck me: ‘Why don’t you hold a workshop and charge money for it? Then, you can see if there’s any interest and if you like teaching.’?” says Hsiung, offering a final piece of advice: Always test the waters before taking the plunge.

“Sketching Out a Game Plan” was featured in the October 2008 Edition of Calgary Inc.