One of the curses of having worked in the software industry is that everything starts looking like it could be explained by a block diagram.

So as I sit in this moment wanting to express something about humanity, I find an urge to draw a diagram… starting with what’s right in front of me: my laptop and my parents.

What I want to illustrate is the thanks that I have for those that have helped me get to where I am now. 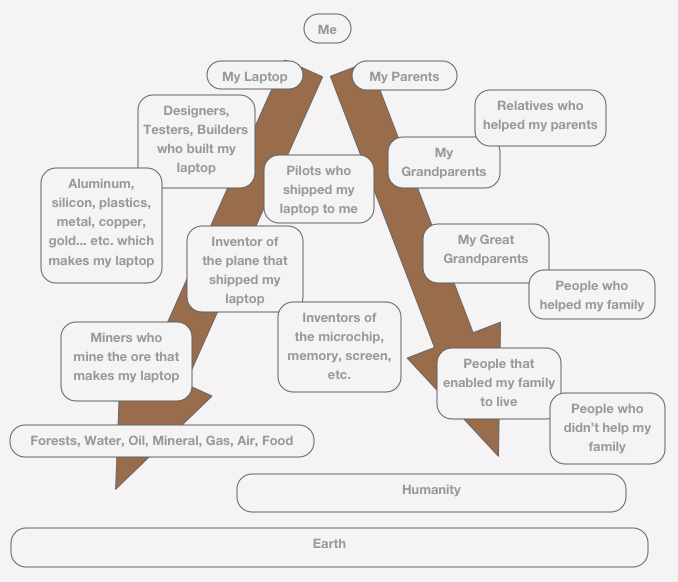 This is just a small fragment of the people that have contributed to who I am today. It leaves me with the inescapable conclusion that “I” as an individual am also part of a “we”.

I surprise myself some days where I imagine myself as this completely independent being. This is ridiculous of course. I depend on humanity as I depend on the Earth.

It can be daunting to imagine that I am a part of such a large system, but it is also profoundly empowering. Humanity has already learned many lessons… some more than once and others that have yet to be learned. And Earth, it has learned even more lessons than humanity!

What is so incredible is that we, unlike any other time in history, have access to these lessons whether it is in objects, in books, in art, in films, or in every mountain, forest, or ocean we encounter. Should we step beyond the borders of our own limited individual lives, we may find a far more real world to live in.

Being a part of this world then puts our individual contributions in context. Emerson reminded us that we should be Man Thinking and not “a mere thinker, or, still worse, the parrot of other men’s thinking” (see Emerson’s The American Scholar). Thus farmers provide food, businessmen create a service or product, and engineers design things for the benefit of humanity. To forget this is to be a small man.

So I for one want to thank my fellow human beings and the Earth for providing, and I renew my pledge to do the best I can to help humanity and Earth.

Chris Hsiung graduated with distinction from the University of Calgary in Electrical Engineering. He is a certified professional coach through the Coaches Training Institute (CTI), accredited by the International Coaching Federation (ICF). He is learning, teaching, presenting curriculum through Leadership Calgary. Currently he runs a practice (U Venture) guiding and coaching professionals who are choosing to engage in significant life challenges.

Three years ago I embarked on a much needed retreat back to Europe where I had once lived. Accompanying me was an old friend from the past… a large book that was a collection of Ralph Waldo Emerson’s writings. There was this wonderful transformational moment in this little known town in the valley of Slovakia called Banska Stiavnica. It had taken a few friendly Slovakian women who didn’t speak English to guide me through two bus transfers and a windy road to get there. But there I found myself in a small bench in a quiet garden where I sat alone for a few hours reading Emerson.

For those that know his prose, it is dense but beautiful and moving when you’re ready for it. What he said to me was:

“Be not the slave of your own past. Plunge into the sublime seas, dive deep and swim far, so you shall come back with self-respect, with new power, with an advanced experience that shall explain and overlook the old.”

In that moment of silent communion with a spirit of the past, was the birth of a new part of me that realized I had to chart a new course guided not by my social status, my friends, my family, but by the light of something more eternal. Humanity and life was calling me to do more.
Everyone should have an opportunity to be free from the conventional, from the matrix of society to ask the question of where they are going. So take this opportunity to step back and allow me ask you, a representative of the human race, this question:

“What most needs doing in our time and place in history?”

Avoid the temptation to answer this question right this instant, but instead feel how big and important this question is. Is it just your needs, the needs of the family, or the needs of humankind? Is history a social studies course we take in school or is it filled with lessons of who we are?

“What most needs doing in our time and place in history?”

You might have images of a rapidly dwindling fresh water supply, hundreds of thousands of bodies from Rwandan genocide, sprawling North American cities with an insatiable consumer appetite, 6.5 billion people on a small planet, rise in fundamentalism all areas of the world, or perhaps it’s the paucity of the human spirit, the sweeping feelings of helplessness or cynicism, the lack of thoughtful, caring, and creative individuals. Or if none of these images resonate, what has you turn away from it?

For those that look, there is a great pain in the world that is so enormous, it makes you want to crawl back into bed and go to sleep. Or in my case, I’d much prefer to go back to playing on my computer where things make sense.

Luckily the awareness of the issues at home and abroad is growing and it helps me to know that there are people like you who care enough to ponder, to investigate.

It is heart-wrenching to see the needs of the world. It is so frustrating that we are exasperated, “why can’t we just fix it?”. But so often we try to fix it and we fail at it. Why is it? It’s the old adage of “we can put a man on the moon, but we can’t feed everyone even in our own nation”. I often go back to an illustrative story from Ronald Wright’s A Short History of Progress.

In it he talks about Easter Island where one can find haunting statues on a desolate island. We wonder whether there was some mystical force at work here. But the actual story is more chilling.
The islanders built these statues to honour their ancestors, but this led eventually to rivalries that resulted in ever larger statues. Statue cults were formed claiming that the ancestors demanded their worship.

Unfortunately, building these statues used up more resources than the island could handle. The forests were wiped out – the same forests needed for shelter, fire, and tilling of the land. The land became acidic unable to grow crops. The citizens ended up eating all the animals including the birds, the dogs, the rodents which only increased their isolation. It wasn’t long before war ensued resulting in the complete destruction of the people.

Who was at fault? What went wrong? There was no disease, no external threat. This was a place where you can stand on the highest point and see the entire island. Who was the idiot that cut down the last tree?

Well I’m going to ‘fess up. It was me. It was also you, and it is also us. The Easter Islanders were human beings and the tragic flaw in the character of their society is also in us. It isn’t hard to imagine us cutting down the last tree, polluting the last litre of water, or killing the last fish in the sea. Will we always be doomed like the Easter Islanders to cut down our last trees for the sake of imagined stories?

There is hope though. We are more aware of the challenges than ever before. We have put a man on the moon. Surely we can also put the beauty of the moon into our character.

Looking at the many endeavours of humankind, we can find many examples of where we have succeeded in overcoming challenges. We managed to figure out how disease works and how to fly in the sky. We have also written about the spirit of a noble character as well as found ways to rise above adversity. The answers cannot be found in one person, one community, or even one generation. They can however be found in the collective striving of thoughtful, caring individuals who open their eyes to the world around them and the complex stories that run inside them. This is why it is called the Human Venture and not one man’s venture.

Are you willing to begin your own leadership journey so that you too can contribute to the venture? Will you “dive deep and swim far” through your thoughts and actions? Will you be a part of the thrilling adventure of being human?

This article is excerpted from Chris Hsiung’s presentation at the Leadership Calgary breakfast orientation March 31, 2007 at the Chamber of Commerce. For more information about Leadership Calgary, see www.leadershipcalgary.ab.ca.

Chris Hsiung graduated with distinction from the University of Calgary in Electrical Engineering. He is a certified professional coach through the Coaches Training Institute (CTI), accredited by the International Coaching Federation (ICF). He is learning, teaching, presenting curriculum through Leadership Calgary. Currently he runs a practice (U Venture) guiding and coaching professionals who are choosing to engage in significant life challenges.

The following link goes to a powerpoint that presents a summary of some of the concepts that was introduced in the opening retreat for Leadership Calgary 2007.

The document should be opened with Microsoft Powerpoint and it should be seen as a slideshow.