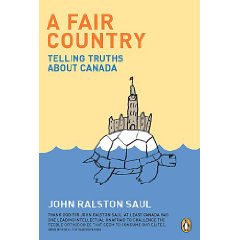 A wonderful counterpart to Ronald Wright’s What is America? is John Ralston Saul’s A Fair Country which tells us a far richer story about who we are as Canadians. Growing up, I developed two impressions of the aboriginals. The first is that the Europeans came, settled Canada, and unfortunately brought with them new diseases that wiped out most of the native population. The second impression that came much later was realizing that the Europeans exploited the collapsing Indian population and contributed to what was a genocide.

While both stories have some truth in them, Saul’s book takes us further back in history before the pity and the superiority complex settles in to when these early European settlers could not have survived without the aboriginals. Marrying an aboriginal was considered to be marrying up because of the many advantages of food and social networks it afforded. It should be no surprise then that the Europeans were in fact “civilized” by the local population.

How did this intermingling gives us the foundation for an immigrant nation? How might we once again draw from the best of our cultural roots to guide us today? And what parts of our mythology is best left behind as being unhelpful in a global world?

If you have a chance, download Saul’s 2009 UBC-Laurier Institution Multiculturalism Lecture below. The link will expire eventually, so act quickly!

2 Replies to “What is Canada?”